The Huntress of Hircine

“The Daedric Prince Hircine is also known as the Huntsman of the Princes, and the Father of Manbeasts. He can call upon the Wild Hunt to punish those who defy him.”

Hircine – The Antlered Daedric Prince of the Hunt who is worshipped by the Witches of Glenmoril, creator of Lycanthropy and main antagonist in Morrowind: Bloodmoon expansion. In Oblivion, Hircine will ask the hero to kill a Unicorn to obtain one of the best pieces of armour in the game.

I’ve never actually killed the unicorn, instead I’d reroll Satin-Blonde Bosmers and sneak my way past the minotaurs to have the Unicorn as a mount. Successfully acquiring it was basically end game for me. I truly hope ESO brings in Unicorns, as riding a unicorn cannot be any stranger than riding a Zombie or Ice Horse.

While Hircine’s statues picture him with a spear, we don’t (yet) have the option to use that as a weapon, however the Altmer Staff & Barbaric 2h Sword have a spear-like look. 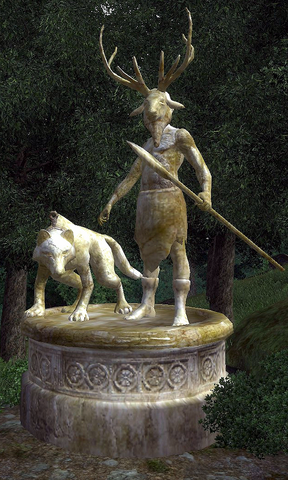 ITEMS USED IN THIS OUTFIT –